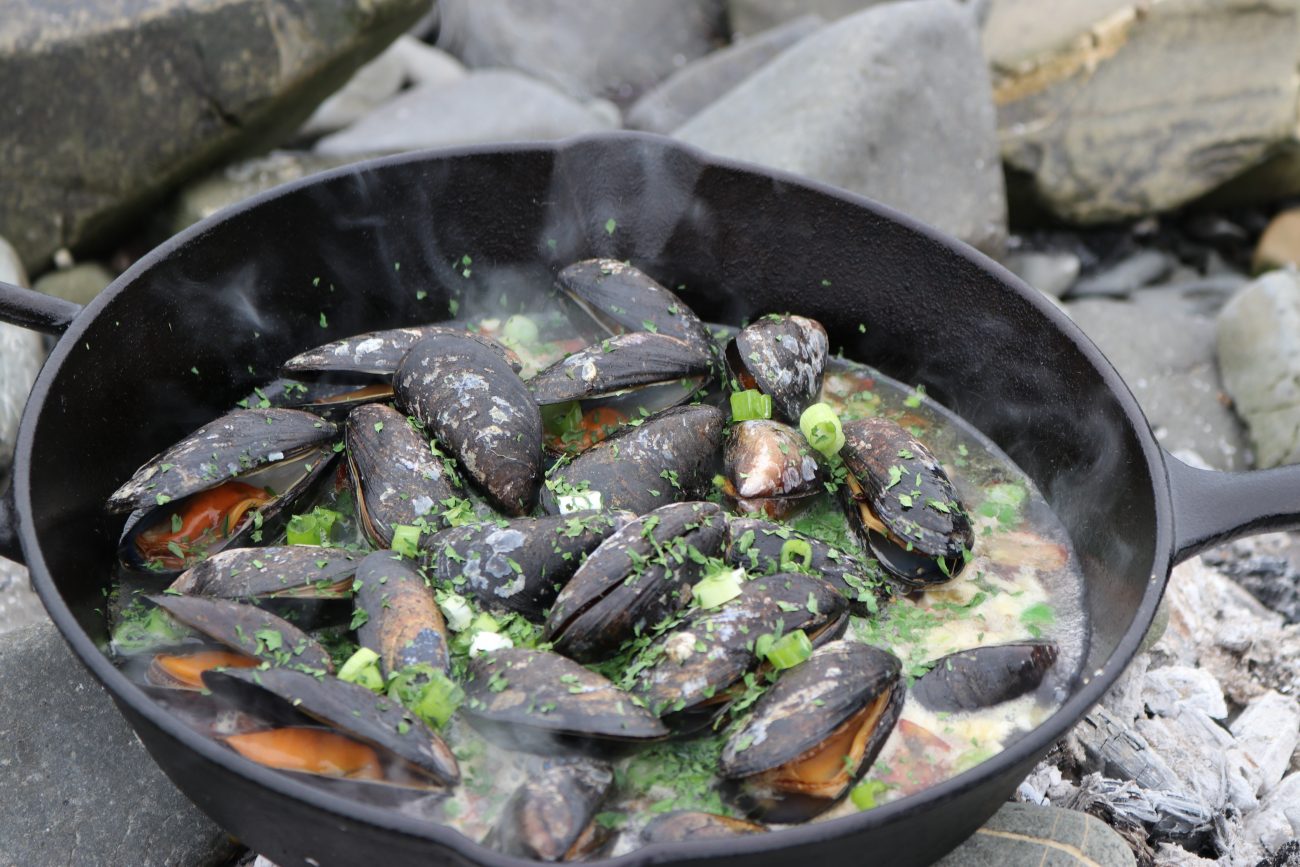 A tasty shellfish recipe cooked in the pan on the beach

Mussels are actually one of my favourite foods. This Mussels with Cider and Pancetta recipe is a long time coming! I love eating mussels; I love how they taste, I love how fun it is eating one mussel with the shell of another, I love how cheap they are and I love how easy they are to cook. Apart from all that, they are also an amazing source of protein! If you’re swimming in or around the sea in Ireland, the chances are there are mussels on the rocks, or seaweed, or pier or somewhere near you. You should definitely check with locals about the water quality – the mussels I used today were farmed!

My friend Marko and I (yes, lots of us are called “Mark”) spent a night camping recently at St. John’s Point in County Down. For lunch we made these delicious Langoustines. We then spent a good hour crabbing and fishing with the speargun off the coast. I brought a bag of mussels from the market, just in case we didn’t catch any fish or crabs… How glad was I! Lighting the campfire at low tide and cooking this feast was the perfect moral and internal temperature boost that we needed after our fruitless swim. Despite the fact that we didn’t catch anything, I had the best time. I have never snorkelled for as long on Ireland’s coast. It is a stunning experience and I would recommend it. We saw plenty of small fish, I found an old aluminium pan which we ended up using and I spent most of my time dodging stinging jelly fish but honestly, it was magical. Under the sea is a different world and thank you Marko for taking me there with you. I am now determined to buy my own flippers and snorkel, but my Decathlon wetsuit is fine, you were cold too! #notanad

They are so many sauce varieties for these tasty little molluscs, this Mussels with Pancetta and Cider recipe is one that I have spent a long time perfecting. Finally, I think I have got it right. On my first attempt at this, eight years ago, I bought some fancy bacon, you know the type. It was twice as expensive as normal bacon, came from a farmer who could name the pig and I was assured it lived a long(ish) and happy life. Little did I know that this organic pig farming meant one thing – that they didn’t remove the hairs of the pig. Now I don’t know what normally happens, if the pork is bleached or shaved or what, but this bacon did not receive the necessary treatment. You couldn’t tell in the bacon’s raw form.

I set about trying to impress my girlfriend (we are getting married next week so it wasn’t that bad) with this tasty recipe. I followed a similar method to the one that’s below, except I was in a rubbish, tiny flat, not a picturesque beach. As the bacon cooked, the invisible hairs on the bacon became… visible. I noticed this but I was too far gone and knew that it wouldn’t matter so much when the bacon was in the sauce with the mussels. I was right, the rest of the recipe went off without a hitch and everything was delicious and I got the boyfriend points for cooking dinner.

Skip 12 hours and I was cooking breakfast with the leftover fancy bacon. If the little hairs were visible on the fried bacon, they were positively in your face when they burned as the bacon was grilled. Again, I played it cool and handed my soon-to-be-wife a fry with the offending hairy pork… You can see where I am going with this, she noticed straight away. Horrified, she demanded to know if this was the same bacon she’d eaten the night before. When I sheepishly confirmed, she proceeded to almost cry while dry-retching over her breakfast. Still together though!

OK, so if you skipped that, you can read again. I often worry about the welfare of NI pork. You don’t see words like “free range” or “higher welfare” on the packet. I was stroked with hairy bacon (that’s the title of that story by the way) the one time I did. But you do see free range or organic pancetta. So I have substituted the Italian version of cured pork into what I still consider to be an Irish mussels recipe.

Finally, with regards to the cider choice, snobs might turn their noses up to the use of Magner’s (over the border – Bulmer’s) but the very sweet cider works well in the recipe. It helps to c reate a sweeter sauce which partners perfectly with the butter and herbs to balance out the salty taste of the mussels.

These mussels with cider and pancetta were actually one of the best things I’ve ever eaten camping. That is saying a lot, it was out of this world. If you’re unsure about cooking them, BBC Good Food has a great guide for buying and preparing mussels safely.