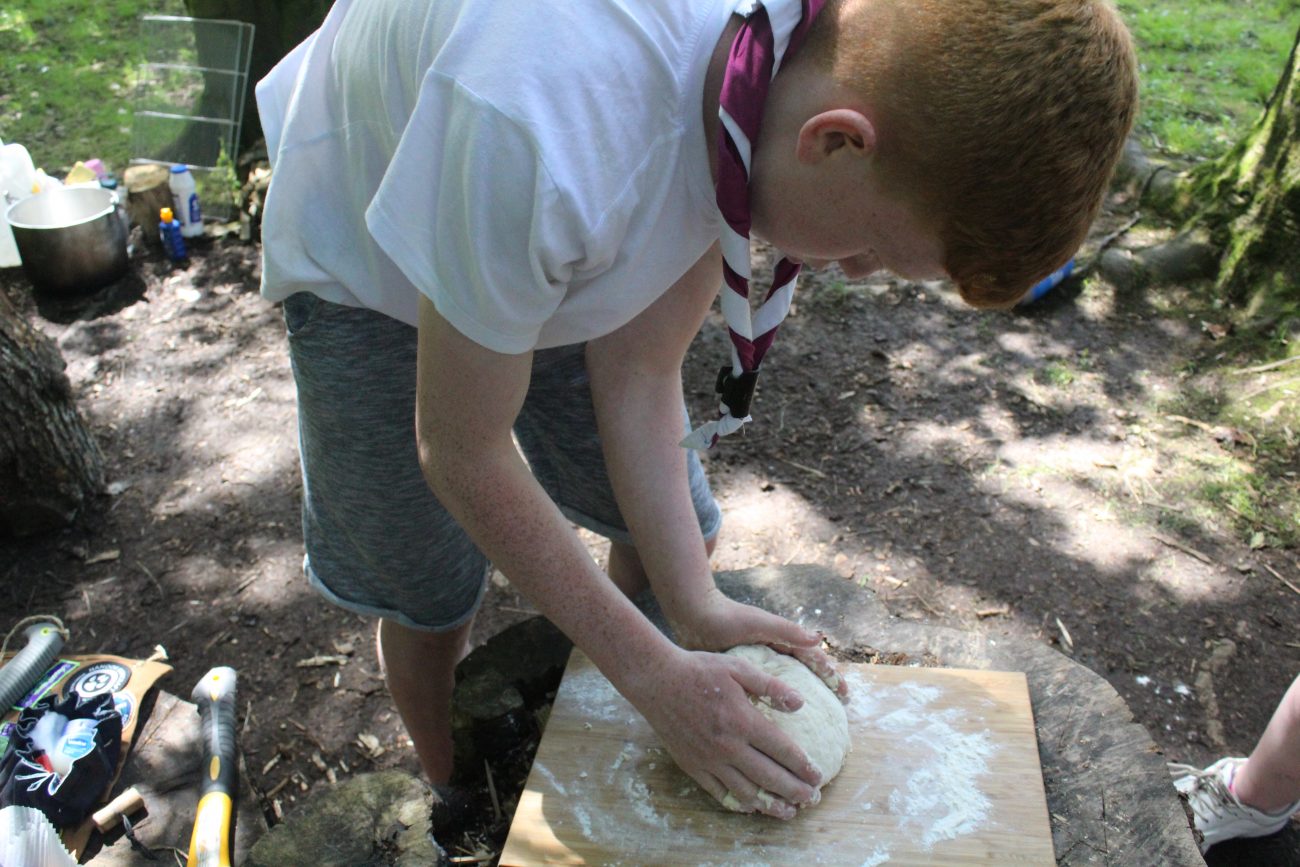 Dutch Oven Soda Bread is a great introduction to camp oven baking. We’ve tried this soda bread recipe a few ways, using a few cooking techniques. It’s actually the same recipe that we used for our Northern Irish Soda Farl recipe. This cooking technique is closer to an Irish soda bread, though it should be made with a brown flour to keep it traditional. We were cooking this Dutch Oven Soda Bread with Scouts during a backwoods workshop so we kept the bread white to appeal to as many palettes as possible.

We’ve done workshops before. We were delighted to be invited to the Field Studies Council’s Outdoor Learning Symposium last year and we filled everyone of our three workshops. We’ll hopefully be invited again if they have another symposium in the future. Campfire Kitchen has also helped local Scout, Cub and Venture groups with basic backwoods cooking and we’re always being asked for advice. This was the first time we’ve ever been asked to run a workshop with a Group on camp that we didn’t know very well.

65th Greenhills Dublin Scouts were having their Summer Camp in Crawfordsburn. The Campfire Kitchen team are based in the Belfast area, a short drive from there. We got talking to them and thought we could help them out with their camp programme. The idea for the backwoods workshop was simple; “An Introduction to Dutch Ovens”. We would have a go at this loaf which we could serve with butter, cheese, jam or Nutella and we also made an attempt at a custard cream cake. We burnt the cake… let’s not talk about that until I’ve perfected the recipe. While things were baking, the Scouts made hotdogs on sticks and generally enjoyed the craic sitting around the fire.

One thing we always make clear with our workshops, be they with new friends or old, is that they are slow-paced. At St. Anne’s Scouts (our group), we know that there is a fine balance between keeping young people busy on camp and giving them the “free time” they’re always asking for. We take a minute at the start our workshops to explain that we’ll take our time, get the food on to cook and spend the rest of the session chatting around the fire and sharing stories. It’s in these moments I have had amazed parents come to me and say that they have never seen their children sit for so long in one place. At the end of one workshop last year at the Symposium, I had a mother come and thank me afterwards saying that she had never had such a long and deep conversation with her son. I’m always amazed by what can happen when you bring people together around a fire. The loosely contained programme of a cooking workshop, where there are plenty of opportunities to sit and chat, provides the “free time” that Scouts often ask for but don’t know what to do with!

We had so much fun with 65th Greenhills that we are considering offering these workshops more regularly!

This Dutch Oven soda bread recipe is a tasty recipe and it’s pretty fool-proof. We had our fire a bit too hot but we still managed to produce a tasty loaf. We just burnt the top a little. Sure that’s how we make our famous Belfast Bap too!