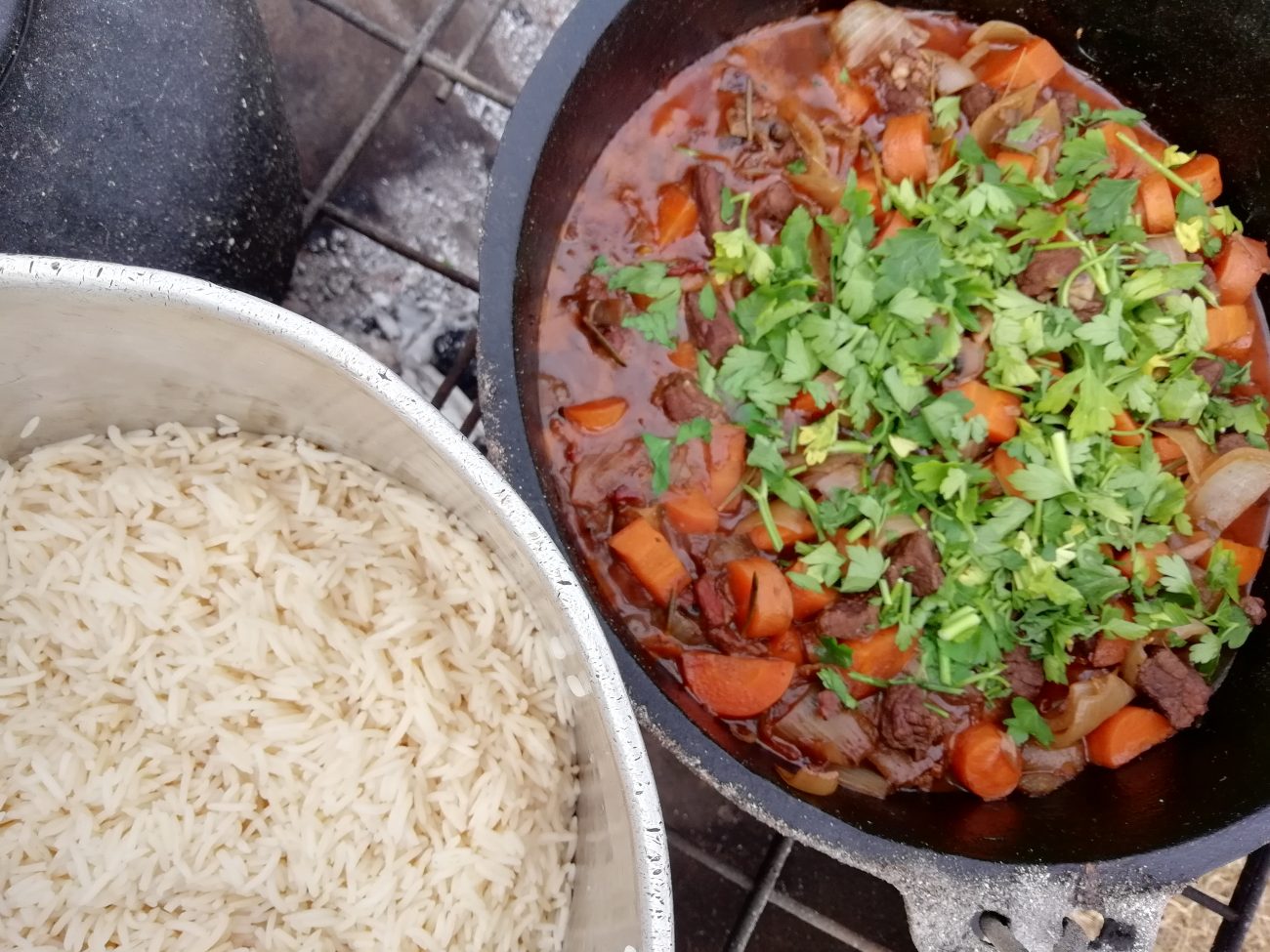 A classic French meal, beef and wine cooked in a Dutch Oven

Beef Bourguignon or “Boeuf Bourguignon”, is a delicious slow cooked recipe made with smoked bacon, red wine and lots of herbs. The slow cooking lends itself perfectly to fire and a Dutch oven.

On the second last night of our summer camp, the Scouts were asked to cook a two course meal for dinner which would be judged by the leader team. Up until this point, we had been eating the same food as the Scouts (honestly, they eat so well).

The Scout Patrols and their PLs had the night before to plan and they had to give us their shopping lists before Flag Up on the day of the competition. Myself and a few of the other leaders chatted with the PLs the night before, to ensure their was a level of ambition involved.

The menus were as follows

Yeah, you read that correctly. Not only were the Scouts operating without recipes, they put these recipes together themselves. I was blown away by the results. All three patrols plated up delicious dinners and great desserts too. They put in such a good effort, I spent a few hours the next morning carving the prize for the winning PL.

We announced the winners as part of our Campfire on our last night. I gave a special mention to the Patrol who made a toffee butter sauce from scratch without a recipe for their banoffee, I also gave a shout out to the patrol who managed to make more than 10 delicious and perfectly cooked chicken goujons. The winners though, were the patrol who produced an expertly balanced burrito bowl which was “better than Boojum”. That’s high praise if you’re from Northern Ireland!

While the Scouts were in charge of their own meal that night. The Scouters needed to rustle something up! This gave me the opportunity to try a Beef Bourguignon recipe I’ve been trying out. Just don’t do what I did and forget to add the bacon and then have to fry it off separately and dirty another pan.

This delicious, luxurious Beef Bourguignon recipe calls for a whole bottle of wine but it cooks for so long, the alcohol has evaporated off. I wouldn’t advocate giving this recipe out to children to make themselves though, I know several leaders who couldn’t resist trying the wine to check it’s alright and I’m sure some teenagers would do the same!

Althought this was a delicious meal, if I am being honest, it was still a little watery, the next time I make this Beef Bourguignon, I will try to let it cook for longer and add a little flour or maybe a good floury potato, this is Ireland after all! It just needed a bit more substance to suck up that rice.