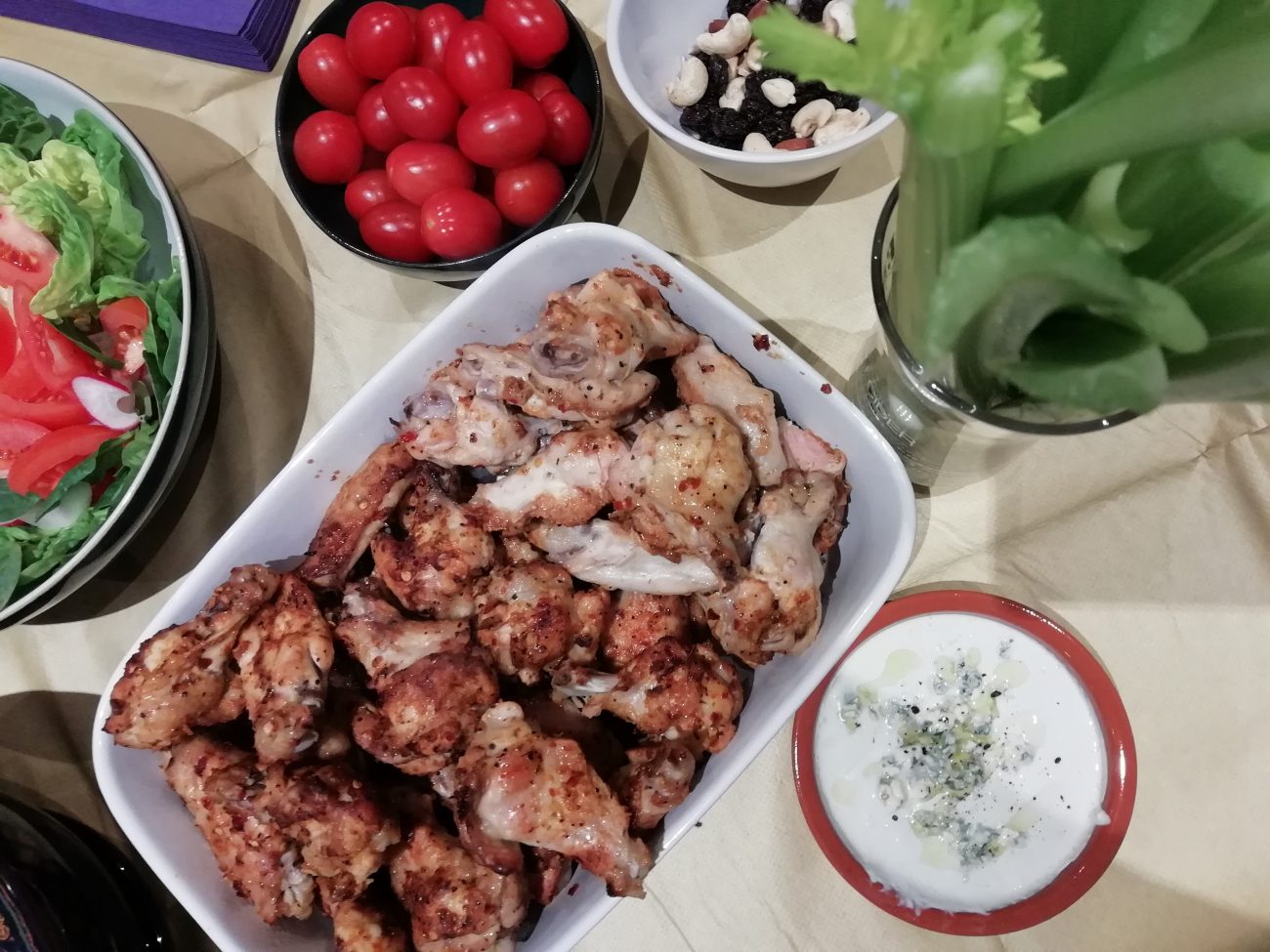 I’ll be honest, it took me a while to write this BBQ Chicken Wing and Blue Cheese Dip recipe after that crushing defeat Ireland suffered on their opening game of the Six Nations last week.

These juicy wings were supposed to be part of a jubilant half time buffet! But alas, it wasn’t to be and instead, people quietly sat around saying things like, “At least the wings are good!”

I started the cooking process the night before when I packed the wings in a flavourful buttermilk mix and left to marinade. The buttermilk gently tenderises the wings and will help the seasoning get into the wings. I let them sit in the fridge overnight. Next the wings were dried and seasoned with the rub and then left to rest for around 4 hours.

Again, I have the Twitter profile @UKRubClub to thank for the rub I used. The group helps companies and BBQ enthusiasts share and get their hands on BBQ rubs. Rubs that they mightn’t have seen or aren’t able to get their hands on. I won a generous 100g sample of Head Country BBQ’s Sweet and Spicy Championship Seasoning. It’s good.

Finally, they were cooked indirectly, nice and slowly on the BBQ for an hour. Sadly, I’ve no photos of this part, it’s because we were all inside with our heads in our hands!

These wings were served with a homemade Blue Cheese Dip. This was pretty important because I planned to serve my wings with two different types of hot sauce. Simply mix the wet ingredients together and crumble in the blue cheese. I like to mash it up with a fork so that it isn’t totally smooth. I like the chunks of cheese so much, that I crumble in extra after I’ve mixed it. There is no chance your BBQ guests won’t know what it is. This Blue Cheese Dip works great with these BBQ wings but it also works perfectly with Buffalo Wings. Why not spread over a great, juicy beef burger for a blue cheesy twist?

In terms of sauce, I was able to get my hands on two bottles of hot sauces from Rock-a-Doodle-Do, The Belfast Hot Sauce Company. The first was their Whiskey in the Bottle. A spicy BBQ style sauce that I also used with these Hot and Spicy Pigs in Blankets! Beside that, I (sparingly) poured out some of their Pooka Ghost Chilli sauce. This sauce is special, named for a mythological Irish shapeshifting creature which can bring good or bad fortune. The hot sauces worked perfectly with the buttermilk brined, sweet and spicy rubbed BBQ Chicken Wings.

So the first match of the Ireland’s Six Nations tour was a wash out but hey, at least the wings were good!