The next chapter in my year of wild swimming 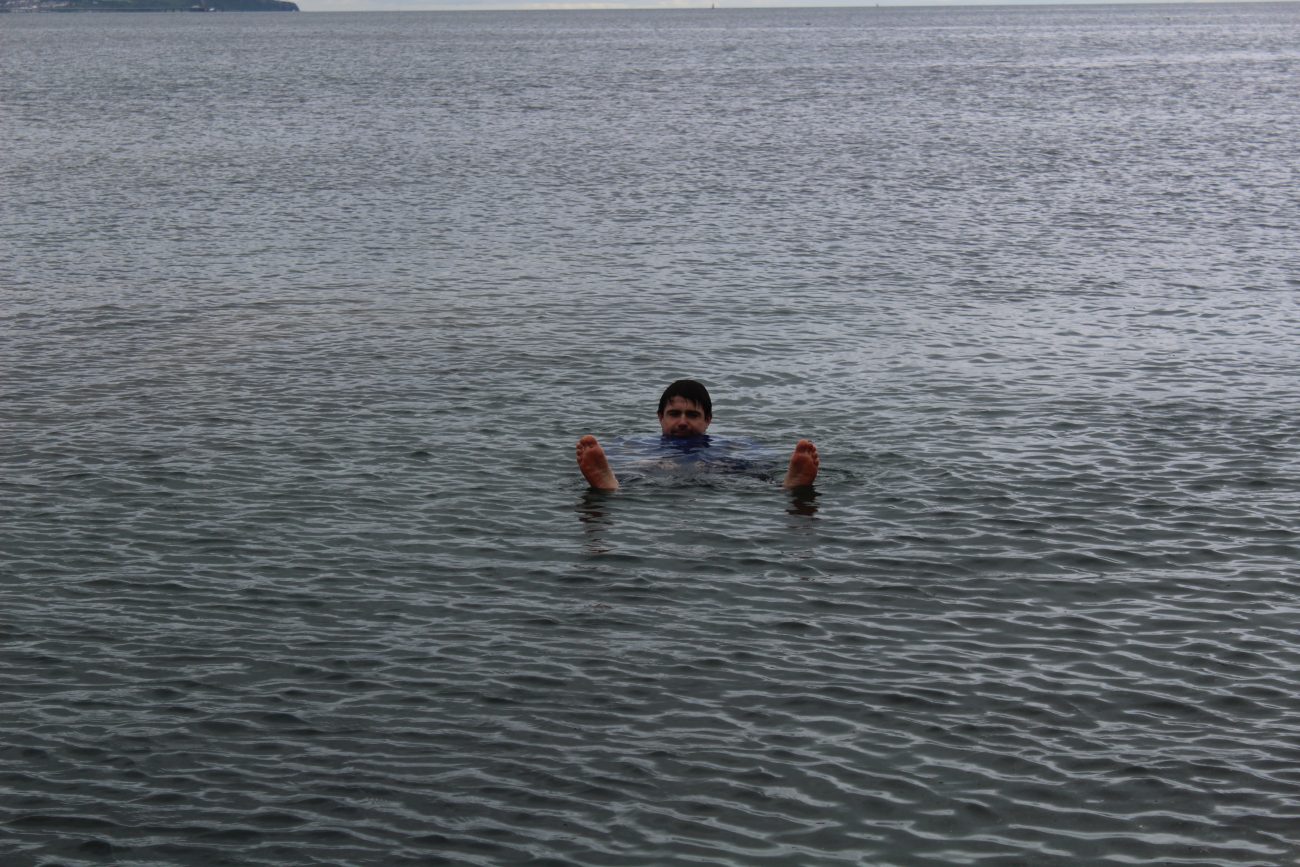 Helen’s Bay is one of the two beaches which make up part of Crawfordsburn Country Park on Co. Down’s Coastline. This sandy beach is where I planned to swim for the second month in my year of wild swimming. The beach itself is about 20 minutes drive from Belfast which means it can be quite busy at peak times. I chose an overcast, cool Saturday at the end of August (the last Saturday before schools come back from the summer) so we weren’t sure how busy it was going to be.

The beach is easy to find, it’s well sign posted. There are two car parks and a train station connecting it to Belfast and Bangor is less than 500m from the beach. Today we were driving, hoping to get a quick swim in the morning before heading home again to do some boring jobs. Isn’t that exactly what Microadventures are all about? The idea that even though I have qute a lot of things to do today, I can still choose to make time to get outdoors and do something exciting. 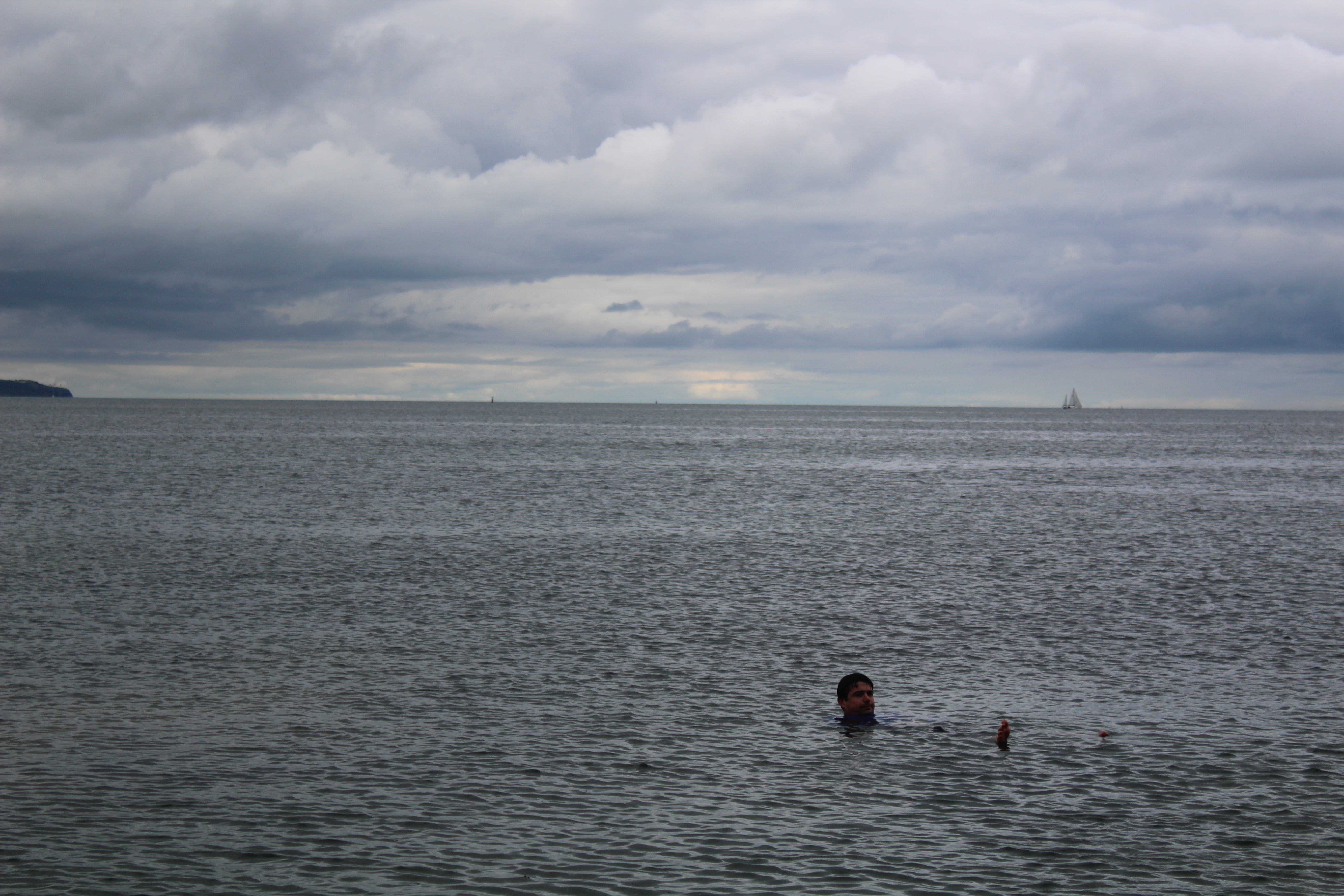 Floating about in my new wetsuit!

We parked the car and made our way down the lane. It was cool enough, not cold but definitely not normal beach going weather. The lane which leads down to the beach was completely lined with huge big rosehips, the bright cheery red clashing with the grey sky. I make a mental note to learn a bit more about these weird fruits(?) and figure out what people do with them. We turned the corner to find the beach very quiet. A couple of walkers, people with dogs and one or two families playing on the sand. Not at all busy. Excellent.

Helen’s Bay is a longish narrow beach bookended on both sides by rocks. We decided early on that we would head to the rocky areas. This was for two reasons mainly, one was for a bit more privacy for getting wetsuits on and off and the other reason was that we thought it would be a bit more interesting. I was glad we did head to the rocks though because they probably ended up saving our camera.

We found ourselves a wee stoney beach at the rocky area at the far end of the sand. It had a small pier like structure that led into the water. I’m not sure what this pier was, in my mind it was too small, too close to the rocks to be a pier but there was definitely some history here. Along the rocks, there were metal pegs pinned into the stone. This pier was interesting, but it certainly wasn’t private. We were maybe 10m from the path. 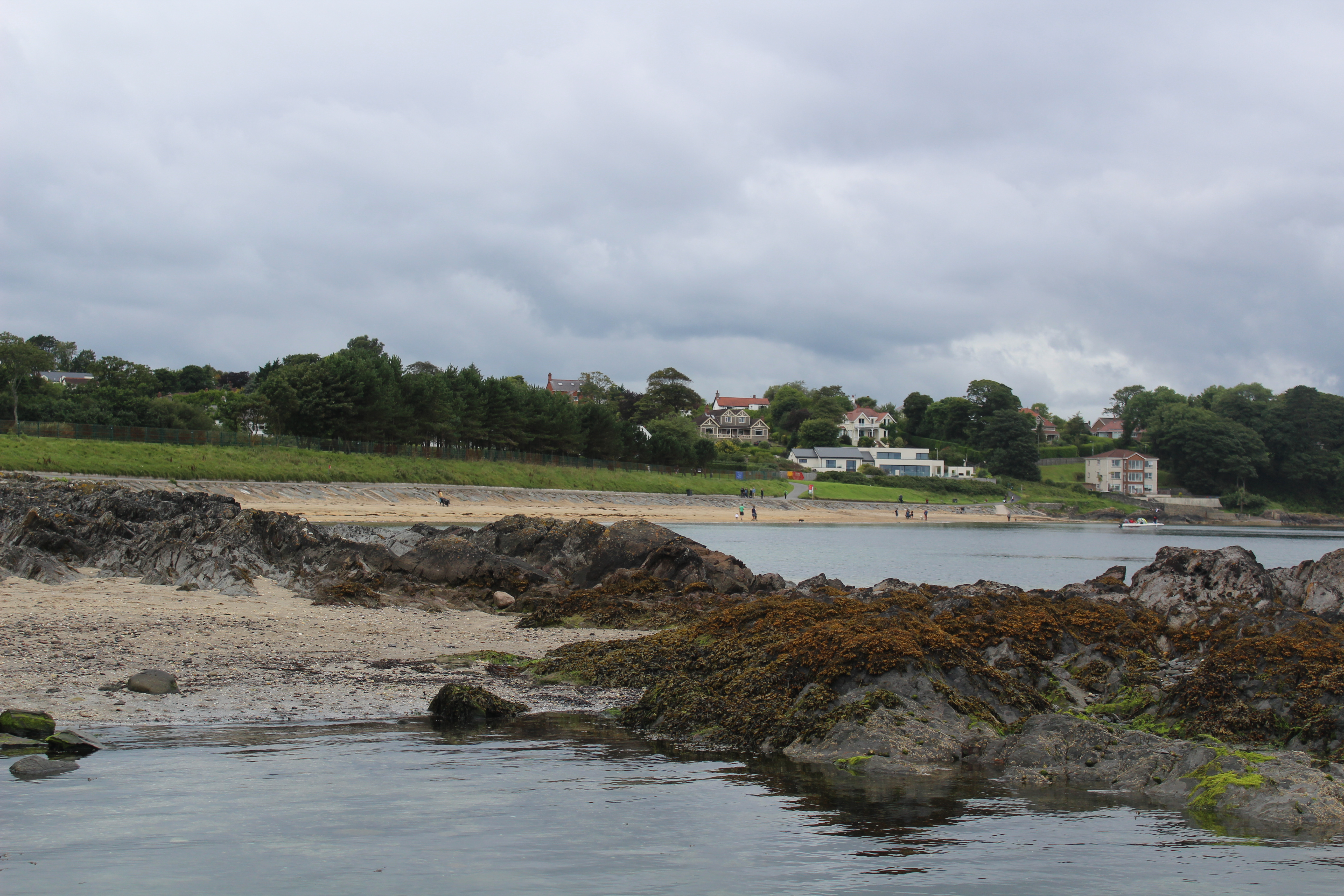 Anyway, it was here we donned our wetsuits. I bought a new Decathlon number for my Microadventure Wild Swimming Challenge and this was its first outting. We left our bags on top of a set of rocks a few metres from the water’s edge. Once properly attired, Patricia and I walked down the little pier into Belfast Lough.

At the edge there was a lot of seaweed so we got past this quickly using the ramp. The sea was so calm, we felt like we were disturbing the peace. Helen’s Bay is supposed to have very clean water, perhaps surprisingly considering it’s on Belfast Lough, a few miles from Belfast Harbour and it’s where the River Lagan drains to. The area is supposed to be a bit of haven for wildlife, especially ducks and wading birds. Beach-goers have reportedly seen dolphins and porpoises in the bay. It was only two weeks ago that a minke whale was spotted in Belfast. Unfortunately we only saw seagulls today. 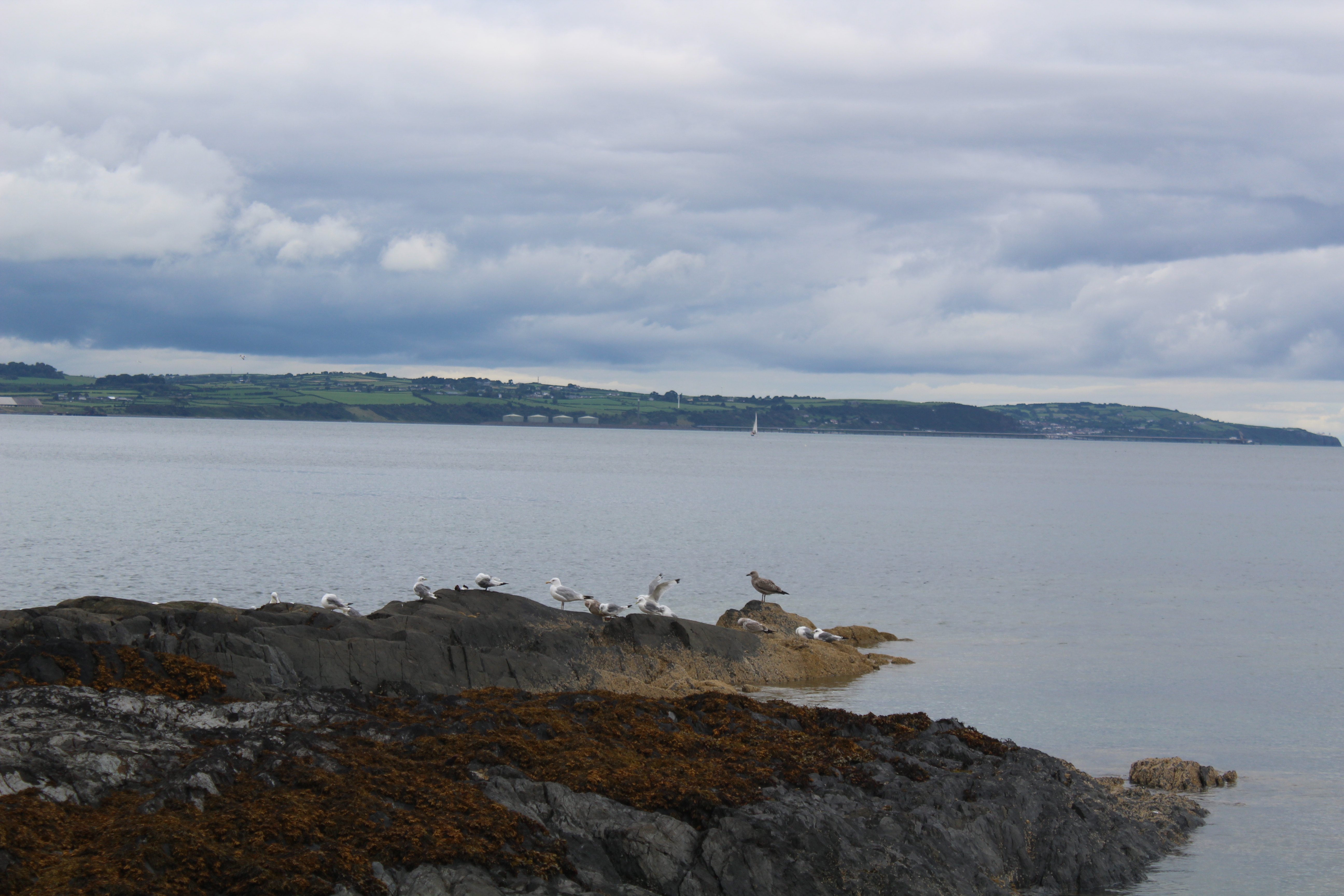 With on-lookers and dog walkers passing by constantly, Patricia and I swam around in calm water. We didn’t do anything too strenuous. I toyed with the idea of jumping off some rocks but on inspection, decided the water around them wasn’t deep enough. I was actually just enjoying floating around in the cool water. In the distance there was some huge cargo boats but also some small sailing boats. 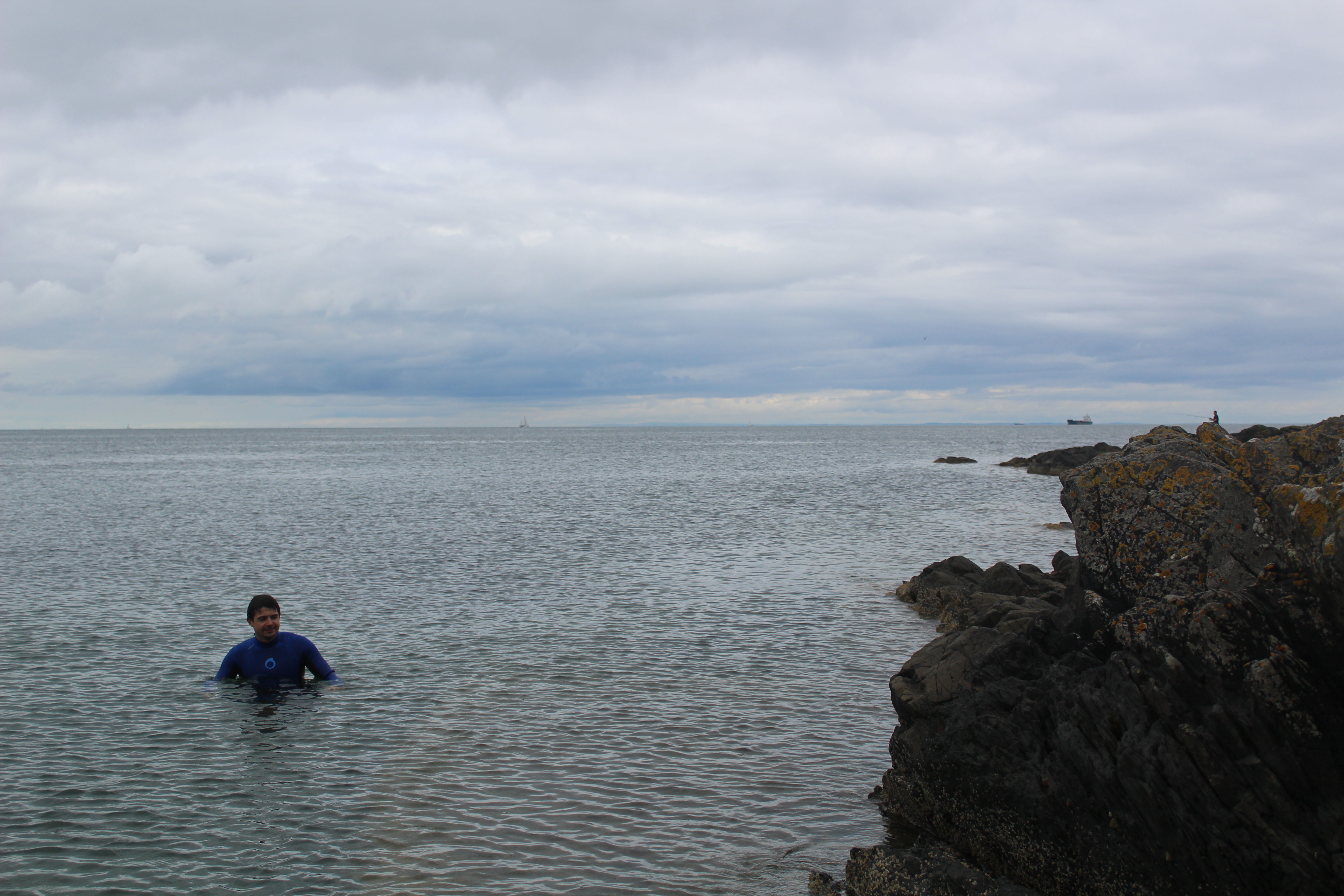 Where I decided the water was too shallow near the rocks for jumping in. Spot the fisherman!

The water was so calm and so clear I could see the bottom, even if I couldn’t touch it. Perhaps if I had a snorkel I could see even more, I decided that I would buy one before I go out again. Until now, in all of Helen’s Bay we were the only ones swimming but we must have inspired a family walking on the main beach. Their children were playing in waves, fully clothed! 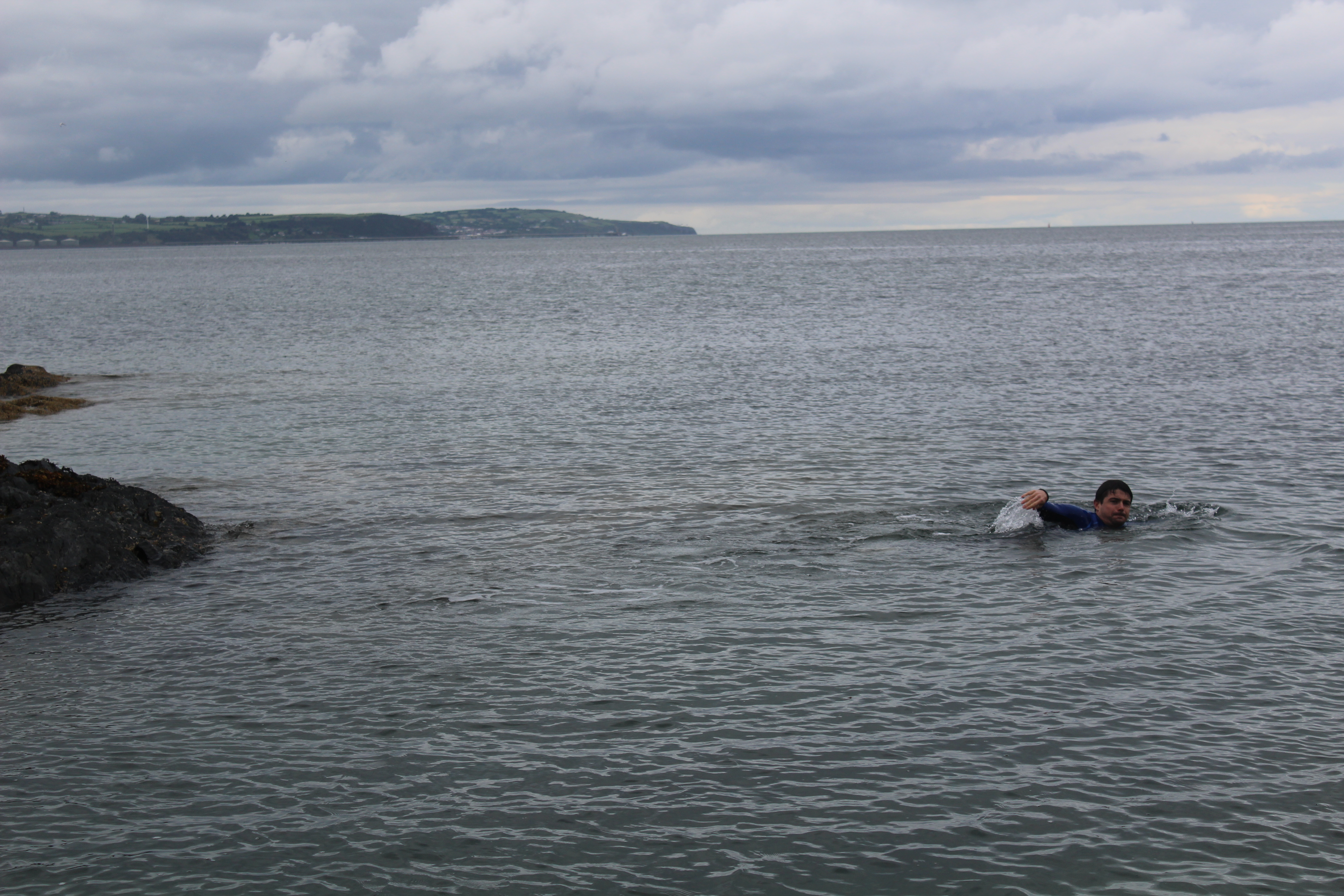 Exploring the rocks, rare photo of me actually swimming

Something had changed, those children were splashing through waves. It wasn’t the calm mirror surfaced water we entered anymore. We turned around to see these new waves lapping at our bags which we had left raised, several metres from the edge. We raced back to grabbed our clothes but more importantly, phones, camera and car key. Luckily we made it on time and moved them further back from the encroaching waves.

With the tide rising, we hadn’t really noticed the change in the sea. The shallower waters were just a bit scummier now, I don’t know if the floaters came in on the tide or if they were floating up from the now submerged beach but it certainly looked less appealing. We went in again for one last jaunt around.

Just beside Helen’s Bay is Grey Point Fort, built at the start of the 20th century. I have heard that one of the first shots of WW2 was fired from here. I can’t find any evidence for this online though. In sight of one of the gun ports from Grey Point Fort we eventually climbed out of the lough and began to dry off.

In all this was an easy Microadventure; a nice beach, good weather and in the summer. I glad I went though, this challenge has forced me to do something which is so easy to do I usally don’t bother. I drive past Helen’s Bay twice a day driving to and from work and have never stopped on my commute. We spent about 40 minutes in the water. Say an hour if you include the time it took to get changed. If I wanted a quick swim after a stressful day at school, I could stop on my drive home, be in and out in no time and be home in time for dinner. No doubt refreshed and happier for it.

So even though this gentle swim was an easy Microadventure, I think I’ll still class it as an important one because it has made me value the ‘micro’ part of the word, ‘microadventure’.

[…] wasn’t too far from where I swam back in August, as part of this Microadventure Challenge, at Helen’s Bay. Back in balmy August, we also noticed a lot of cargo […]