Well it’s time for my September Wild Swim Microadventure. I’m three months into the year long challenge and feel like I’m building in confidence as we edge closer to those cold winter months!

During the recent Campfire Kitchen Autumn Camp, the participants decided to get a wild swim in on the morning of our heading home. Since we knew it would be high tide, we thought to head to Newcastle, Co. Down to jump off the pier. What better way is there to clear the cobwebs after the night around the campfire which had just passed? When we arrived at Newcastle, we saw that the pier was full of fishermen.We decided to move on, not wanting to annoy those whose fish we may frighten away.

Around the corner up the Kilkeel Road, not far from where we were fishing for mackerel the day before, is Bloody Bridge. The area has a good car park which was lucky as there was a big crowd of us. The cool Bloody Bridge River flows from the Mournes. You can take the path up into the Mournes which will lead you to the Mournes Wall and to the infamous Brandy Pad, an old smugglers’ route. The area is famous for having an array of rare dragonflies and butterflies. The flora in the area, a well established dry heath, is considered rare in Europe.

Today the carpark was pretty busy as it was forecast to be a sunny day. We spotted a few other people in wetsuits on their way up to the cars as we made our way down to the river. Shivering, a small boy assured me the water was indeed “freezin'”. 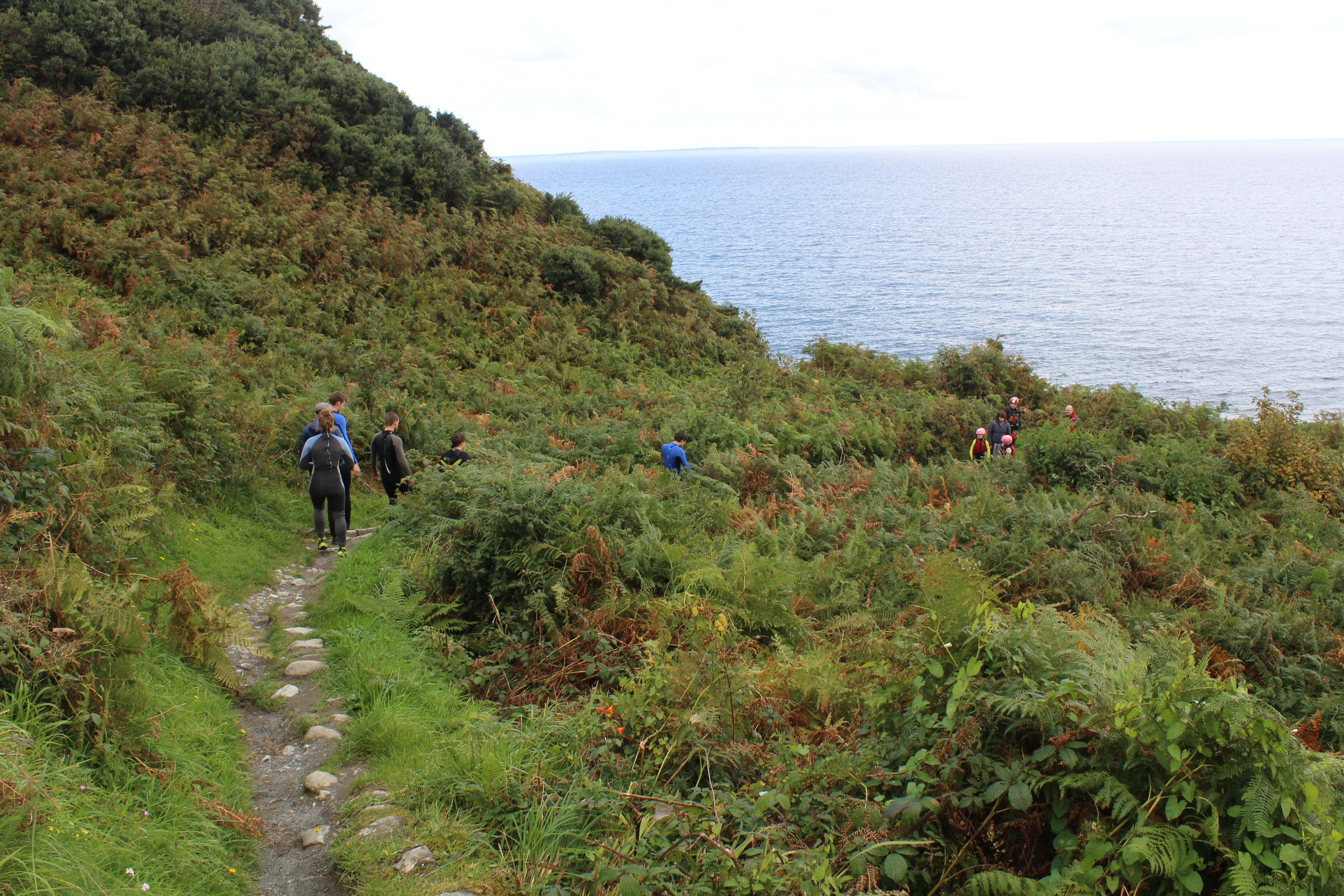 Crossing paths with another group of microadventurers.

The first thing we did when we reached the river was slide down a smooth section of the river into one of the deeper pools at Bloody Bridge. The Bloody Bridge Bouldering Team with river slide in the background

I know this section of the river well. When I was growing up, my dad used to take my two brothers and me to boulder here. At this pool, we would each have to hold on to a big rock and jump in. We’d sit like genies on the bottom of the pool and the last person to resurface would win. I think between the three of us, we’re probably responsible for making this pool about half a metre shallower than it used to be. We jumped about in this section before deciding that the kid was right and it was baltic. The deep baltic pool, it used to be deeper!

The sea was bound to be a bit warmer than the river in September so we climbed down the river. Not having wetsuit boots had its advantages and disadvantages. On the smooth white rocks and on the seaweed, I seemed to have much more grip than those who wore footwear of some kind. My grippy feet sticking to the rocks

When we got to the sea, it was very calm considering we were in the Irish Sea. It was a warmish day on land but the water was nippy enough. We were right though, the sea was far warmer than the river. We had expected the water visibility to be very poor because of the turbulent weather over the last few days. Despite the named storm Aileen which struck earlier in the week and the torrential rain which threatened our camp, one of the team managed to do quite well with the snorkel. Every now and again, she would dive down and come up with various sized common starfish. I was also hopeful though she would come up with a big juicy crab. Finally we reached the sea, Emma snorkeling on the look out for starfish!

While we were swimming around, a drone started flying around and actually got very close. Its pilot was clearly filming us which, to be honest, made us a little uncomfortable. This was compounded by the fact that it took us a good while to even figure out who was controlling it. Later, when we made our way back to the cars, I found the guy and asked him if he would send me the footage. He agreed, a little apprehensively, to email it to me. I thought it would make a nice unusual addition to this blog post. He never did.

Tim, doing his best impression of the Little Mermaid Statue in Copenhagen

It really was a beautiful day; it was so clear we could see the Isle of Man. Guillemots were flying over head. Would have been perfect if it weren’t for the creepy drone.

I mentioned earlier that going barefoot had its disadvantages too. Well, it might have been better for grip on my way down, but with the tide going out more rocks were exposed. These new rocks were covered in sharp, rough barnicles. My feet were cut to shreds by the time I’d reached the nice comforting seaweed and smooth rocks. Time to get home and smother them in Germolene. 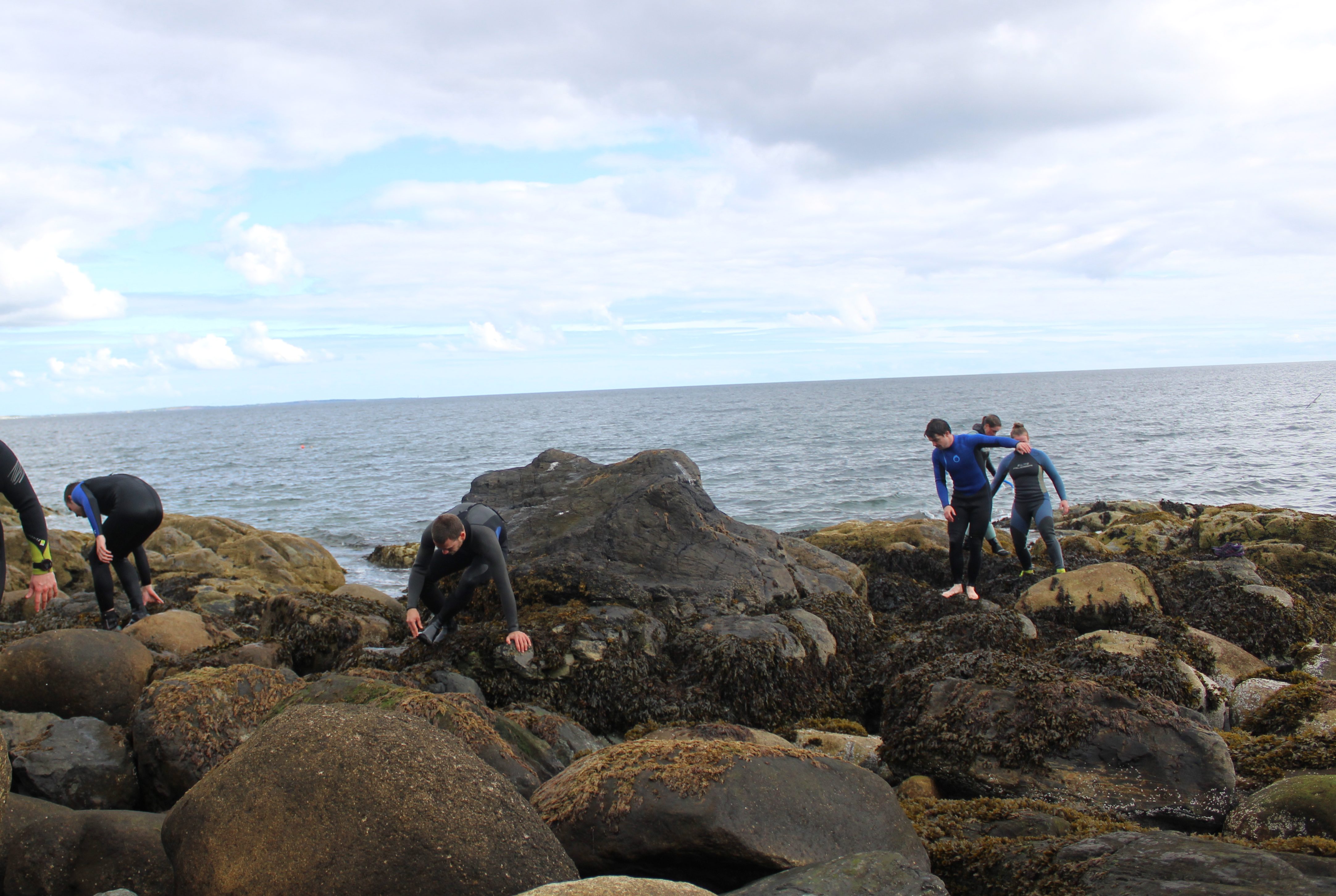 Me, bootyless, cutting my feet up on the barnicles

Can’t wait to see where my October wild swim microadventure takes me.

[…] you reach the stile at the bog, you could follow the path left, down to Bloody Bridge where I was bouldering last autumn. We were heading right though onto the infamous Brandy Pad. The Brandy Pad is an old smugglers’ […]