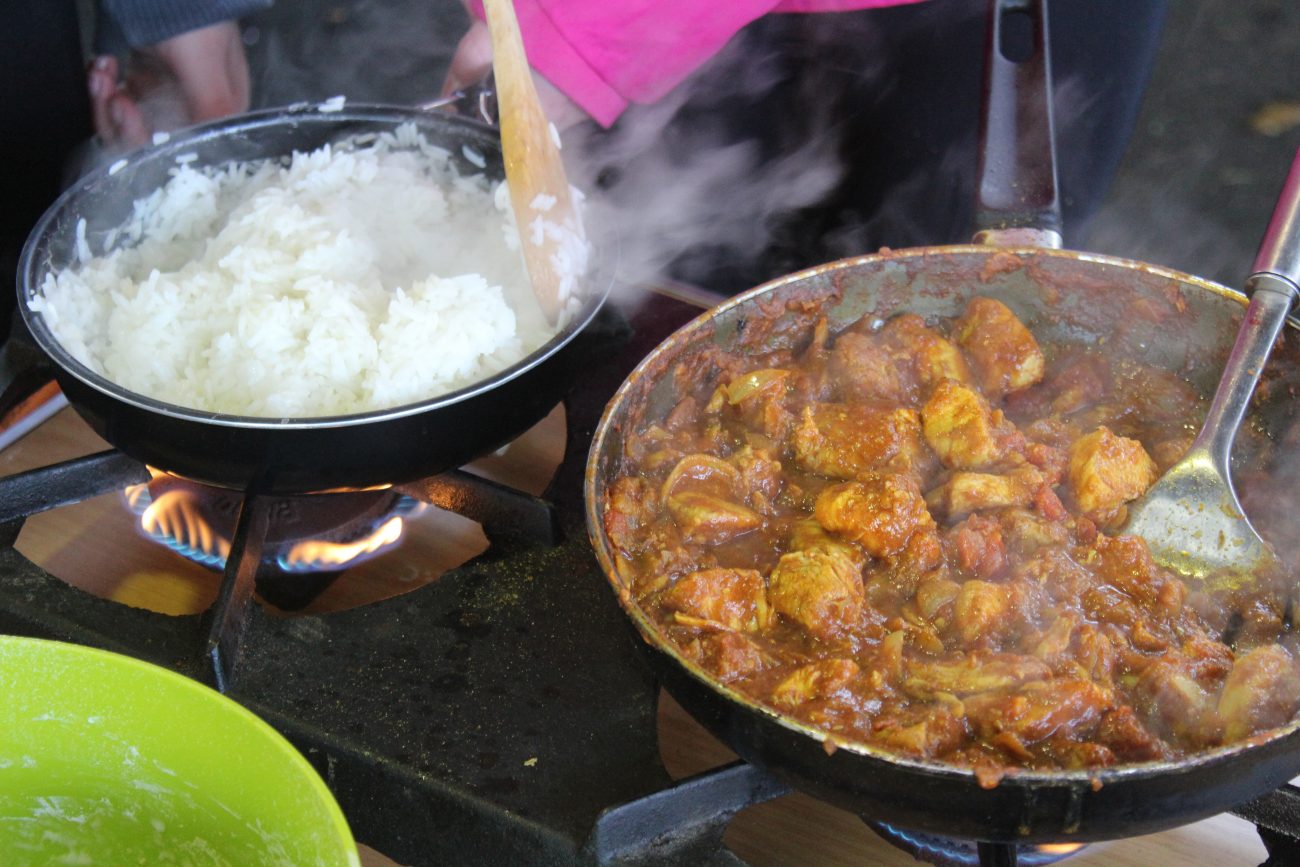 Crawfordsburn Scout Centre, minutes from the sea on North Down’s golden coast, was the venue for this year’s Down and Connor Scouting County’s Cooking Competition. There were 7 Groups represented at the ‘Ready, Steady, Cook!’ themed competition with 18 teams taking part. In total, there were 72 Scouts cooking!

In this post I plan to give you a run down on how the Scout Cooking Competition worked in practice, give a few shout outs to some people but also to talk briefly about some of the eye-catching food which these teenagers managed to scrape together!

So how does a Scout Cooking competition work?

The premise was simple, each team had to prepare 2 courses; a main and a dessert. The main would be randomly chosen, either Chicken Curry or Spaghetti Bolognese and the ingredients were supplied for this. This worked well, there was a little leeway in what you could do to the recipe but you then had to supply any extra ingredients. So to me, most of the main courses tasted very similar. There were a few stand out exceptions!

I wasn’t judging, that was left to the professionals. The owner of ‘Scoff’s Fish and Chip Shop’ and of ‘The Pizza Place’, two local businesses, were giving up their time to judge. Marks were awarded out of 5 for taste, hygiene, presentation and time-keeping. 20 points up for grabs in total. Prizes were kindly donated by GO Outdoors and were given for 1st, 2nd, 3rd and Best Dessert.

Like I said, I wasn’t judging this Scout Cooking Competition, and I was glad for it. So many of these 18 main courses tasted the same. That being said, some were definitely better (and worse) than others. I’m not going to delve too much into things that went wrong, after all, we’re dealing with children and this was all in the name of fun.

For the curries, one group brought their own spices to the competition, and had mastered their own tikka marinade. Others decided to make their own sides; throughout the day I saw nans, raitas, chutneys and garlic breads. With the Bolognese, there were all sorts of cheeses and fresh herbs brought. I saw one group making their mince into spiced meatballs. It was incredible the amount of variation these young Scouts managed to pull from two very simple recipes.

I do plan on getting the recipes the children used onto Campfire Kitchen by the end of the week.The Desserts!

These were the reason I wanted to write this blog. The desserts that these young people put up for judging were incredible. The judges left licking their lips and I saw one ask a 13 year girl for the recipe of her Chocolate Oreo Mousse (fingers crossed it’ll be on Campfire Kitchen soon!) I’ll let the photos do the talking but there were Cheesecakes (Mmm), Churros (another one I plan on stealing), a Baked Alaska (Mental, I know!), freshly prepared crepes and many more!

Remember those presentation and hygiene points?

Well at this Scout Cooking competition, people took these points to heart. To these young people, presentation doesn’t just mean on the plate. No. One group went to town, laid on table cloths, napkins, flowers, music, you name it! Another group, took it as how they presented themselves! Bow ties ready?

Some groups went all out with the hygiene points, wearing hairnets, aprons, gloves and always making sure there was separate boards for raw and cooked food. Each patrol from my group brought a hand wash basin and made a separate dish washing station with hot water always available. All good food hygiene practise to reduce cross-contamination. You could learn lessons from watching these children work. Though in some cases, they may have been taken as lessons on what not to do!

All in all, it was a great event and I want to thank Neil, our Assistant County Programme Commissioner for Scouts, for organising the event. I’d also like to thank GO Outdoors for sponsoring the event! Without their support, we’d definitely have had to ask our Scouts for a bigger fee for the event or have to accept lesser prizes. I know, they have a new customer in me.

A big well done to 29th Belfast who won ‘Best Dessert’, 10th Antrim (Woo! My Group!) who came 3rd and Downpatrick who came second. Congratulations to 31st Belfast who took away top prize.

I’m sure some great memories were made and I think there will be a few more budding cooks and campfire chefs as a result of this competition.