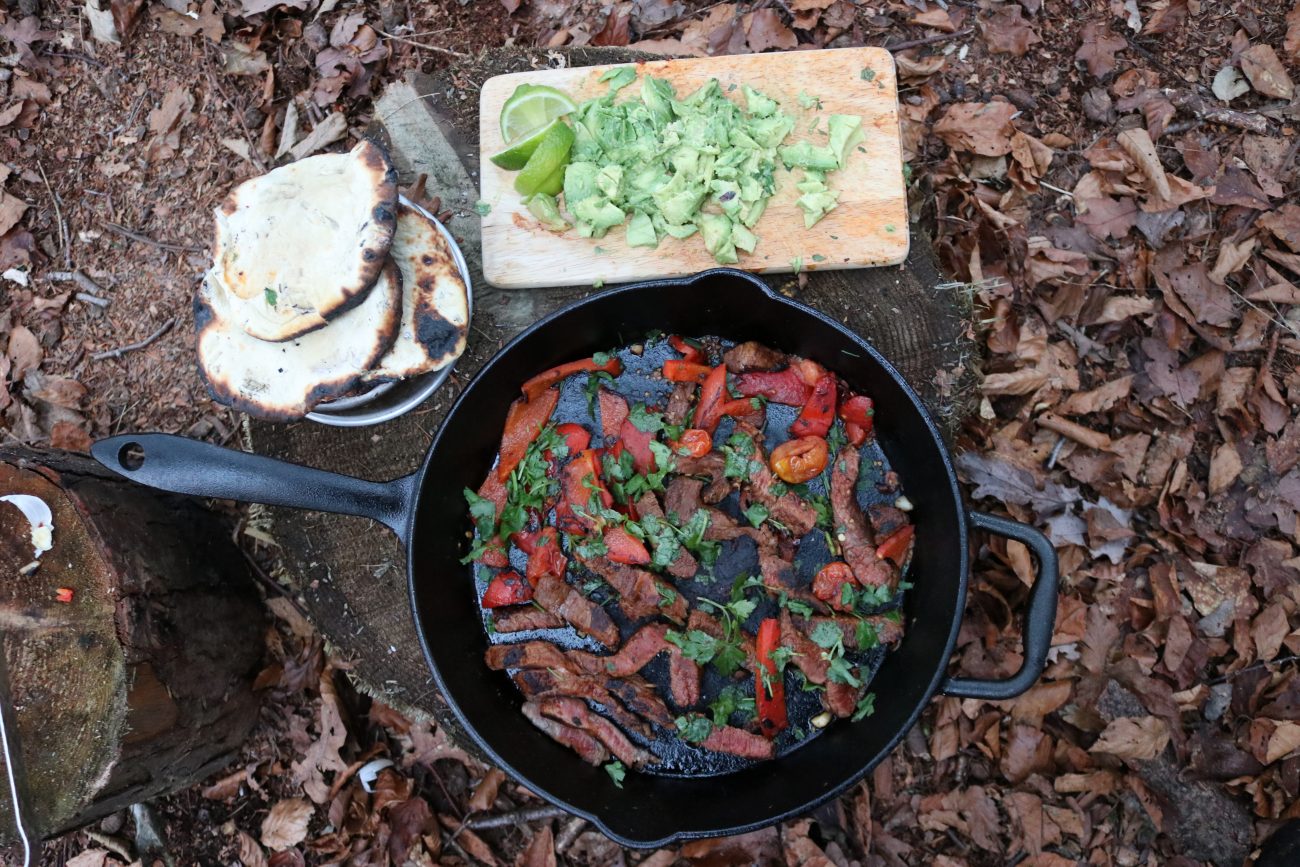 I made this delicious Chipotle Steak and Fire-Roasted Red Pepper when wild camping this January. We were out hoping to capture photos of, or at least see, the Quadrantid meteor shower. It was due to peak on Thursday night and early Friday Morning. Myself and Marko set up camp and made a delicious dinner. Afterwards, we made the fire safe and then set off with our cameras.

We were heading to a couple of dark sky spots, Spelga Dam and Carricklittle. We saw no meteors, or even stars! The weather had betrayed us. Our next plan was to head towards Bloody Bridge. Although not the darkest sky, the lights on the far side of the water added to the lighthouse at St. John’s Point with the Irish Sea to our right made for a nice night picture. Unfortunately, I am not skilled enough to capture said nice night picture! There were no stars at all.

The weather forecast boded better for early morning shots of the meteors, so we decided to call it a night and try our luck in the morning. We parked up and hiked back into our camp. We set alarms for 4am, 5:30am and 6:30am. I was on duty at 4am and 6:30am and Marko took 5:30am. The clouds never broke! The silver lining to this cloudy evening was of course that it was no where near as cold as it was forecast. We were both rather toasty despite it being January! We’d love to hear if you’ve had any better luck with the Quadrantid Meteor Shower or if you were clouded out like we were!

For this Chipotle Steak and Fire-Roasted Red Pepper dish, we cooked up some fresh tortillas and we’ll get a recipe up about those in the next week or so! Using the jar of Chipotle paste and lime gives bags of flavour with very little effort! Let the flavours marinate while you roast the pepper, it doesn’t take very long at all because you’ll be cooking your steak so quickly. Roasting your pepper over the fire like this gives you a much more intense and fresher taste than using jarred ones. To finish the dish off, we used a handful of parsley and coriander to build on that fresh and vibrant Mexican flavour.

We used a nice piece of rump steak today because we were frying it quickly with the Fire-Roasted Red Peppers and tomatoes, you could also use sirloin or anything else which will be delicious with a hot, fast cook. Cooking steak on cast iron is one of my favourite ways to cook beef on the fire because it gives you a flavour-packed crispy crust on the outside of the meat. Cast Iron is definitely worth the weight.

Served with the freshly cooked bread and smashed avocado, this Chipotle Steak is so tasty, Marko said it might have been his favourite Campfire Meal ever. With the Roasted Red Peppers, it really was up there as one of the tastiest and easiest things I’ve cooked on camp.