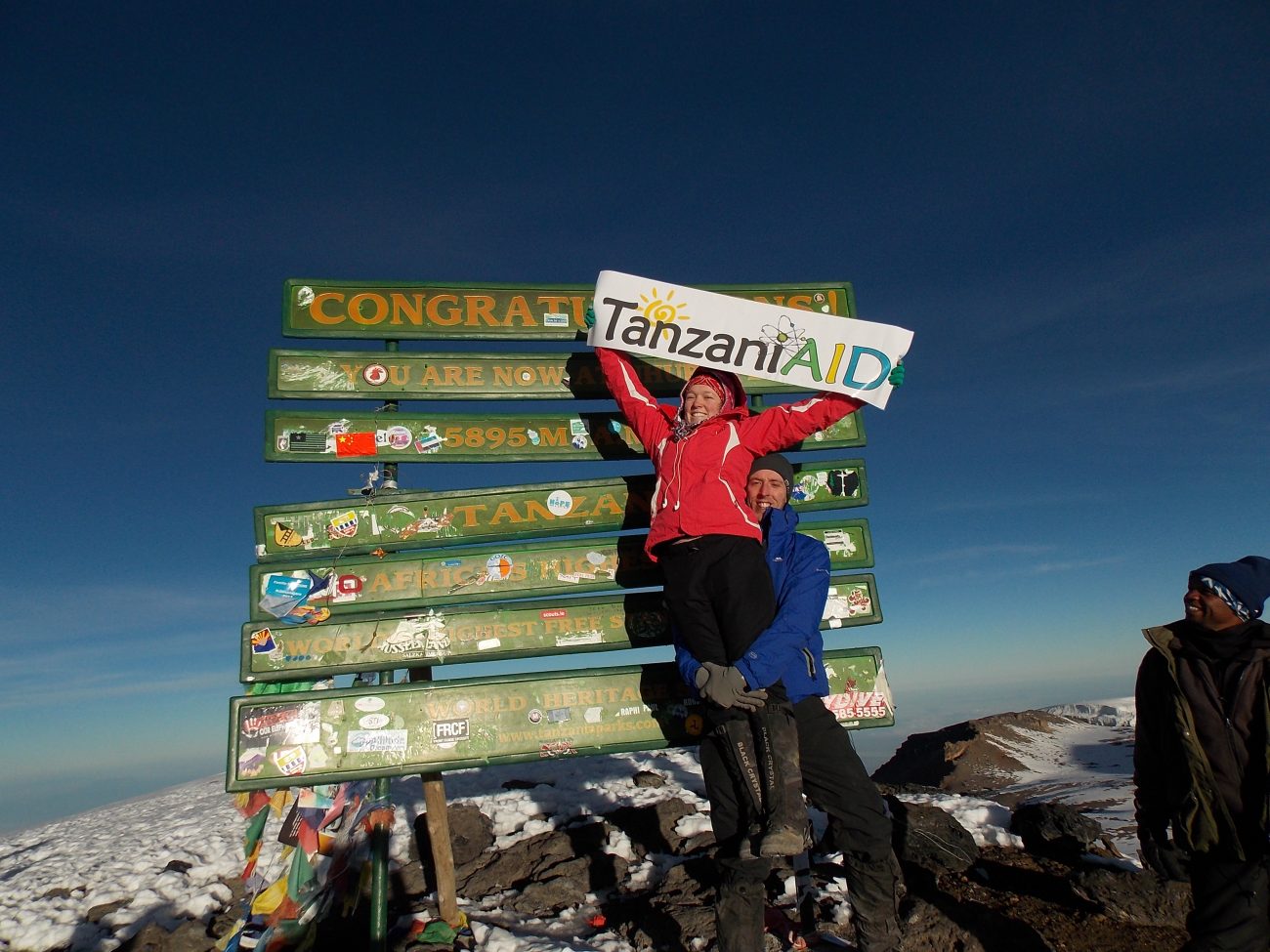 At the end of 2013, Irish Students Brendy and Clare travelled to Africa to complete tailored outreach work, helping school children. On their adventure, they made time to climb Africa’s tallest mountain.

Brendan: We are a married couple in our thirties currently living in London, but originally from Northern Ireland. I am from Belfast city and joined St Anne’s 10th Antrim scouts when I was 16. Monthly camps to the Mourne Mountains, and annual camps to further afield (e.g. France and Austria) grew my love for adventure more and more. Not to mention walking 200km across Poland with Campfire Kitchen’s own Mark T on our Explorer Belt in 2008. I am currently a research associate studying laser-plasma physics at Imperial College London.

Clare is from Killeeshil in County Tyrone. Clare studied physics too; she completed her PhD in lasers and plasma physics then moved on to work in business! She is now a Management Consultant in London.

We try our best to make adventures in the big smoke, but also to escape when we can!

What was one of your most memorable adventures?

Clare: We’ve been fortunate to travel all over the world both for work and for pleasure. We enjoy doing outdoor activities wherever we go. This includes hiking in Brazil, kayaking in Croatia, skydiving in Hawaii, cycling in Canada, skiing in New Zealand and climbing Mount Fuji in Japan.

The most memorable adventure for me was our trip to Tanzania. We raised £10,000 for TanzaniAID, a charity we created, and we installed solar panels in a boarding school. We also funded educational scholarships and donated medical supplies to a rural clinic. Obviously, we also had to do a fun outdoors activity when we were there… so we climbed Mount Kilimanjaro! 😊

What were you two doing when you set up TanzaniAID?

Brendan: The idea of TanzaniAID was born while sitting in a traffic jam in Oxfordshire. We were both PhD physics students at the time (we weren’t a couple back then) and were travelling back to the airport from a physics Christmas conference. We were discussing how science outreach that we regularly volunteered for could be tailored to have an impact in developing countries. We didn’t originally choose Tanzania, or the specific project. We just decided we would do something that would make a difference, and then we put our thinking caps on.

Why did you want to set up a charity?

Travel to Africa for 2-3 weeks / Any money raised won’t go towards our flights, accommodation, food, any extra activities (e.g. climbing Kilimanjaro, going on safari etc.) / Do something that is specific to our skillsets. Use our scientific background and knowledge to do something impactful / Use our experience to promote education in science and STEM subjects.

By the time we finalised our ground-rules, we couldn’t find a specific charitable project that met all our needs. So, after a bit of researching and exploring options, we decided to do it ourselves! We identified a cause in Tanzania, and TanzaniAID was born!

What did you get up to in Tanzania?

Brendan: We packed a lot into our 3 week adventure. We joined the locals for the turn of the new year (2014) at mass… in Swahili!

We visited 2 schools, one which we were supporting with solar panels, and a second school where we were funding educational scholarships. We arrived at St Amedeus Secondary school on the fourth and final day of the installation of the solar panels. We helped Mr Samson, the electrician, with the final connections of the 8 huge batteries which are recharged every day by 10 solar panels on the school roof and provide a much needed constant and reliable electricity source for the dining hall and the kitchen each night in the school.

We also went on a 2 day safari where we saw elephants, giraffes, lions, zebras, warthogs, wildebeest, buffaloes, rhinos, ostriches, hippos, deer, hyenas, monkeys and much, much more. A monkey tried to steal our lunch and we saw a real zebra crossing! An elephant almost charged at our truck and a lion stood next to the truck for shade. A baboon climbed on the roof and a rhino paraded right in front of the truck. A wildebeest gave birth and the baby took its first steps within minutes and we saw a family of warthogs trying their best to escape a pride of lions who had just woken up from their afternoon nap feeling peckish and were closing in on the warthogs from all angles.

And we climbed Kilimanjaro!

Was the Kilimanjaro climb an attempt to get people engaged in the charity aspect of the project?

Clare: To be honest, not really! Climbing Kilimanjaro is something Brendan and I wanted to do, and we funded it ourselves. It didn’t quite tie in to the charity project initially. Nevertheless, at the top of Kili, we posed for a photo where Brendan was holding me up whilst I was holding the banner up (which was difficult for Brendy given the altitude and effort it required); that photo ended up being viewed thousands of times, and actually gave the project some unexpected exposure!

Tell me about the climb, what were the high and low points?

Clare:We had a 6-day hike with 2 guides, one cook and 7 porters for company. The first few days were straight forward, not too tough. On the third day, after the Barranco wall climb, a stretch often referred to as “Breakfast”, we reached an altitude of 4600m where it was difficult to breathe. We hiked on the fourth day and slept from 5pm for a few hours and then woke to complete our summit climb at midnight. It was 7 hours of walking practically straight up! It was dark and the “path” was sandy. We found it so difficult to breathe and felt really tired. For the first 6 hours we didn’t seem to get any further up as all you could see ahead were the glow of other climbers’ head torches.

We watched the sunrise at the summit where there was now snow on the ground. From here we could see Uhuru peak in the distance, it was another 45 minutes away. We … walked … very … slowly… and …. panted … for … breath … with … every … step! We were instructed to walk “pole pole” in Swahili, meaning “slow slow”.

We finally made it to Uhuru Peak, the tip of Kilimanjaro, the highest point in Africa, the tallest free standing mountain in the world, 5895m above sea level. We puffed and panted for a while as we took in the wonderful spectacle of the Eastern African plains that our vantage point afforded, then somewhat reluctantly we turned and started the long journey back down. It felt like such a great achievement to make it to the top and to arrive safely at the bottom was a huge relief.

Our guides Heaven and Matei were brilliant, looking out for our safety on what can be a life threatening climb and they went well beyond the call of duty when Matei invited us both to his home for dinner the next evening.

1) “Breakfast”! This is a massive wall of climbing that you sleep beside on the third night. Contrary to being known as the toughest segment of the entire climb, we were well motivated for it, we put some good tunes on our borrowed mp3 players (with rationed batteries!) and powered our way to the top!

2) Seeing sunrise at the top was one of the most beautiful and surreal scenes I’ve ever witnessed. Standing over all of Africa and watching the light slowly grow and cast itself on the landscape, a spectrum of colours from dark blue through orange to vivid red, the hairs stood on my arms, and I am man enough to admit I teared up a bit!

3) The climb itself went through many different climates and terrains; humid jungle on day one, hot, sandy desert for a few days, rocky and steep on the fourth day and cold and snowy on the final climb.

4) We ate surprisingly well on the mountain. We had popcorn and hot chocolate. Dinners had potatoes, meat and veg. The meals became increasingly spicy as at higher altitude taste buds aren’t as effective (apparently!?!)

5) We were very careful with our water consumption. We boiled water that was sourced from rivers and tributaries on the mountain. We also added purification tablets to the water at higher altitudes when the boiling point of water was lower.

6) We went above Tea Level! Tea brews best at 95 degrees Celsius. The boiling point of water is lower at higher altitudes due to the decreased atmospheric pressure. At 4,500m (day 4 elevation), water boils at 85 degrees Celsius, so it isn’t hot enough to brew the tea effectively. SCIENCE!!

Memories you’d be okay not to remember:

At the campsites on the mountain, there were toilets. The toilets were essentially a pit in the ground filled to the brim. The smell is something I prefer not to think about!

I also got a spot of sunstroke on the descent… life lesson – always wear a hat and suncream!!

Was the trip worth it? Do you think you made an impact?

Clare: Our adventure in TanzaniAID is my proudest accomplishment in life to date (sorry Brendy – it trumps getting married!!)

For a bit more context, the school St Amedeus is a boarding school which appeared to be in the middle of nowhere, catering for 500 students from all over Tanzania.  The students aged 13-21 (with a few older than that) have study time in the evenings. They read, revise, complete “homeworks” and have extra study classes if they are struggling with certain areas. The national electricity supply is somewhat unreliable and could, on occasions, be off for days or weeks.  Sunset was around 7pm, at which point, the lights came on in the assembly hall filled with students. We were there during a blackout; where the electric cut out across the region, yet, the hall remained illuminated, filled with all the students working inside, unaffected by the power cut.

We’ve also been fortunate to maintain contact with Lebo and Tolian, two students who we sponsored through secondary education. They not only topped their year in school, but were placed in the top 10 in the National exams! These two students wouldn’t have been able to afford secondary education without a scholarship, and they made use of every opportunity to learn.

I’d love to go back to Tanzania again in the future. I’m not ruling out climbing Kilimanjaro again… but I’m also not signing up here and now! Hopefully we can scope another impactful project and have a good reason to make the trip over.